Posted on September 19, 2012 by Danielle @ DiningWithDani 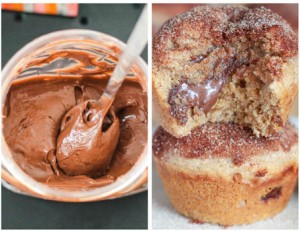 One of the fondest memories of when I was younger is my aunt making me and my cousin cinnamon sugar toast. I know that “it’s simple” to put butter and cinnamon sugar on toasted bread, but she always made extraordinary toast. It was ridiculous. Therefore whenever I find a recipe that calls for a spin on this delicacy, I jump on it as fast as I can.

This recipe makes cinnamon sugar muffins that are also stuffed with Nutella.

Fun tip: Always check to see if you have enough of all the ingredients. I knew I had a jar of Nutella in my pantry, and I always have cinnamon sugar on hand, so I just went for it. When it came time to stuff the muffins, I had less than two tablespoons of nutella left in that jar…so always make sure you’re prepared or you’ll have to improvise like this:

I ended up making two Nutella muffins and the rest I filled with Biscotti Spread from Costco. (It tasted like cinnamon peanut butter).

Recipe (forcably adapted because I had no nutella) from: Sally’s Baking Addiction

Here’s what you need:

Here’s what you do:

2. Spray muffin pan with cooking spray and set aside.

3. In a mixer, cream together butter and sugar. Mix in the egg, vanilla extract, milk, flour, baking powder, cinnamon, nutmeg, and salt.

5. While the muffins are cooling, make the cinnamon-sugar topping. Melt the butter for about 30 seconds in the microwave. Stir and stick back in microwave if not fully melted. In a separate small bowl, stir together the sugar and cinnamon. Dip the top of each muffin into the melted butter and dip into the cinnamon-sugar mixture. Swirl them around in the cinnamon-sugar a bit to make sure you get a thick coating. Set upright on cooling rack. Enjoy!

Thanks to Sally’s Baking Addiction for the awesome new recipe.

No thank you to whoever ate all my Nutella (probably me).

This entry was posted in Desserts. Bookmark the permalink.